Pancakes and orange juice. That’s how Myles and I started our first day in Bucharest, Romania. We heard about the Grand Cafe Van Gogh prior to our trip and wanted to give it a try. Located within Old Town, the cafe is a mile from the Labirint Hotel. True to the name, there are a vast number of Van Gogh paintings throughout the restaurant. Their pancakes were thick and the orange juice freshly squeezed. Better yet, the prices were beyond reasonable. A fantastic way start to our morning.

The first location Myles and I visited after breakfast was Pasajul Victoria, a popular street in Old Town. Multicolored umbrellas are layered above the street, a beautiful work of art. When Myles and I arrived to the sight, we encountered a couple in the middle of a dramatic photo-shoot. The male posed in a number of positions while the female snapped away with a camera. Myles and I felt awkward amongst the couple, so we took a few photographs and left. We moved onto the Cărturești Carusel bookstore, passing the Stavropoleos Monastery along the way. 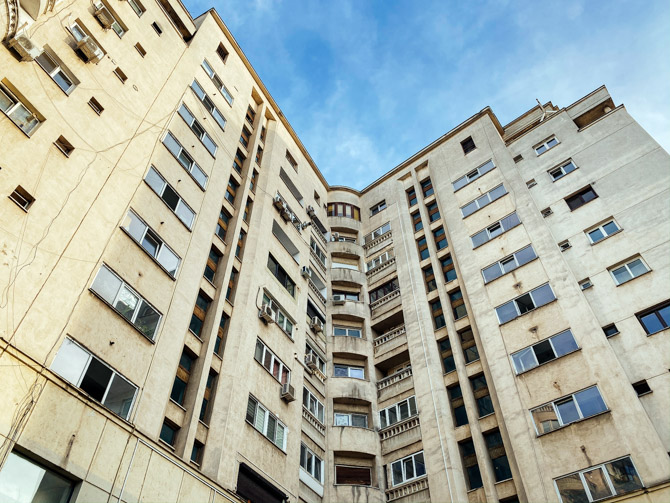 The Cărturești Carusel bookstore reminds me of an old bank. It spans six floors and is painted white with curved balconies and spiral staircases. There is a tea house on the top floor and a plethora of books to be found below it. There is even a basement level with movies, games and vinyl records. The majority of the books in the store are in Romanian but there are a number of titles in English.

From Cărturești Carusel, Myles and I looped around the Palace of the Parliament. It is the heaviest building in the world, with a weight of 4,098,500,000 kilograms. Don’t ask me how the building was weighed, because I don’t know. What I do know is that it takes a very long time to go all the way around it. As the building is surrounded by high security walls, the backside is about the only part of the building where a clear photo can be taken. Tours of the building can be arranged but Myles and I decided to pass on the opportunity. It would most likely take hours upon hours to tour the entire building. 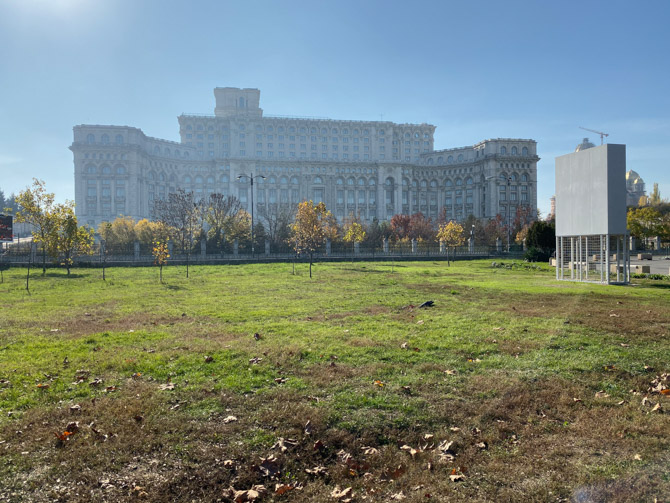 For lunch, Myles and I ventured around Old Town in search of food. A woman kept cat calling to Myles, so I made sure to do circles around that particular establishment. We ended up having goulash at an outdoor restaurant in Old Town. It was more along the lines of me choosing goulash and then Myles copied me. The meat and potatoes were superb though. I do not remember the exact cost of the meal but it was cheap for the amount of food we received. Nearby, we also had semifreddo for dessert at a placed called Cremeria Emilia.

We spent the remainder of the evening wondering around Old Town and nearby areas of Bucharest. When the sun started to dip around five in the afternoon, we walked back to the hotel. As we planned to spend the next day in Brașov, Myles and I went to bed early. Though as I expected, I could not sleep without a fan. Luckily, there were a few channels on the television available in English. I spent a few hours watching movies and finally fell asleep for a few hours.