I touched down in Norway to a sunny view of distant fjords, islands and a fleet of helicopters. It was nine in the morning, four hours before Myles was due to fly in. Since I didn’t have any luggage to claim, I bought a cup of coffee and relaxed in the main lounge. The Bergen airport is small in size, which left little to explore. But the nearby gates seemed to be busy. There were a range of flights going in and out for the first few hours and then it got real quiet.

Myles arrived shortly before two in the afternoon, with other passengers from Amsterdam. Him and I proceeded to customs, only to find it vacant. We slowly walked through, with the expectation that we’d eventually see an employee. But then we emerged into the main lobby of the airport. No one questioned us and we never had to show our passports. To this day, I’m still not entirely sure why. The employee for Sixt car rental told us it wasn’t necessary.

The drive to the First Hotel Marin was long and tedious. Traffic was backed up and moved at a slow pace. But eventually, Myles drove us into downtown Bergen. Only, he ended up in the wrong lane at one point, which sent us on an extended tour of the city. Similar to Iceland, vehicles were parked haphazardly. Some cars and vans were even parked halfway onto sidewalks. Myles parked the rental vehicle underneath the hotel, with a cost of twenty-five dollars a day.

After we checked into the hotel, Myles and I walked over to see the Hanseatic buildings of Bryggen. The heritage site is located along the eastern side of the Vågen harbour and a block away from the First Hotel Marin. The sunlight was nearly perfect, which made the long row of red and white buildings stand-out. Two of the stores were under construction, with massive tarps draped over. Each tarp had a detailed illustration of the building underneath.

For the next few hours, we explored Bergen on foot. The city is well dated with old buildings and churches. Some streets are made of cobblestone, which reminded me of Boston. Graffiti is common to see, with a mix of tags and murals. Along a side street near the city square, Myles and I came across a monstrous dog tied to a rail. The dog had a heavy coat of hair and was focused on someone in a nearby store. I tried to get it’s attention but it paid me no mind. 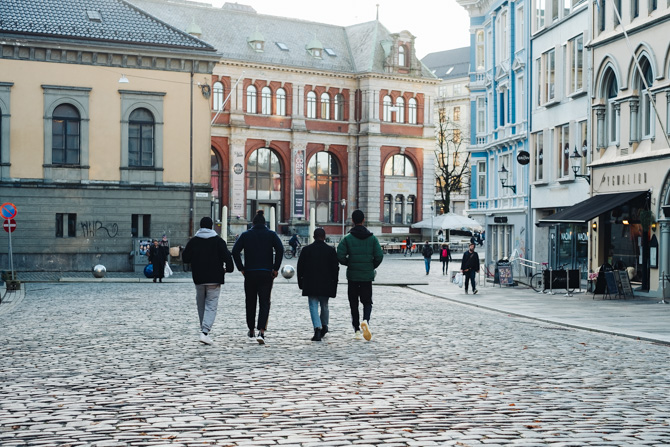 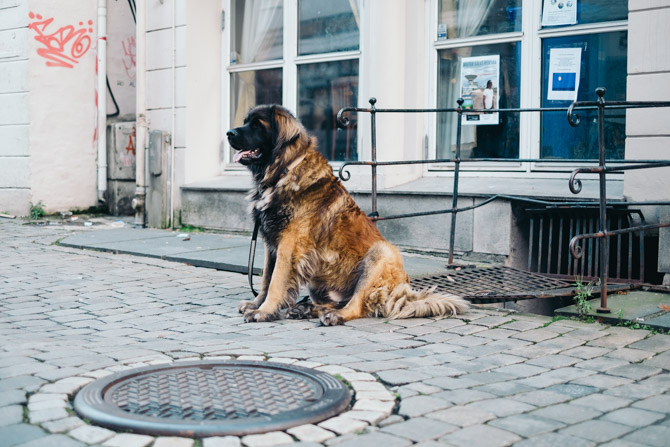 For dinner, Myles and I went to the Rock and Roll Diner. We spotted the joint after walking through one of the many side streets in Bergen. Themed after the 1950s, the restaurant has a full-size New York City taxi-cab out front. Their waitresses wore vintage skirts and dresses. Well known for burgers and milkshakes, the food was absolutely delicious. I ordered a large platter of pancakes which came with a side dish of ice cream. Myles ordered a burger and french fries.

With dinner complete, we returned to the hotel. Our plan was to get up early with the goal to hike the Aurlandsdalen valley. From Bergen, the trailhead is nearly three hours away. So we wanted to have plenty of time to drive, as Norway receives a small amount of sunlight in the fall. The average amount being between five and seven hours in late October. Our only detour would be a stop for food at one of the many Joker grocery stores before the hike.