For the final full day in Tokyo, Japan, I wanted to visit Ikebukuro for the Pokémon Center and revisit Akihabara. Which meant that it was going to be a long day. But I still made time for breakfast at the Bonsalute Kabuki. I mixed it up this time and try some noodles and white rice. But I also had potatoes and sausages with orange juice. Even though the food was delicious and it was a buffet, the restaurant was pricey at nearly three-thousand yen.

After breakfast, I walked over to Shinjuku Station and purchased a ticket that would take me from Shinjuku to Ikebukuro to Akihabara and then back to Shinjuku. I paid under five-hundred yen, which was cheap. The ride still lasted a half-hour to Ikebukuro but the car was nearly empty as it arrived at the station. The plus side was that the station was heated. It was a chilly day in Japan. I had to break out my windbreaker and gloves to stay warm.

But I had to exit the station eventually to get to Sunshine City, a shopping mall, which is where the Pokémon Center in Ikebukuro is located. The mall was a twenty minute walk from Ikebukuro Station, which took me through a wide range of side streets, alleys and even a highway. There weren’t many people around, which made the city feel somewhat empty. I did, however, observe a large raven that was perched on a street sign for a few minutes. 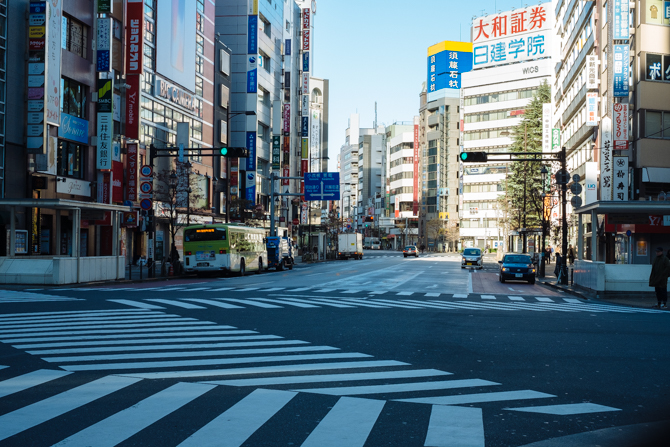 Once at Sunshine City, I went to use the one ATM machine in the mall to take out more yen. Unfortunately, the machine did not accept Visa cards. Which meant I had to scramble to find a 7-Eleven before the stores opened. Google Maps reported the nearest location to be back near Ikebukuro Station, which would have been a long walk. Oddly, I found an unmarked 7-Eleven nearby within five minutes. I took out ten-thousand yen and purchased a coffee with some change I had left over.

The walk back took me across a multi-lane highway, which was almost bare. A lone taxi and city bus waited at the stoplight. Even though I had plenty of time, I still crossed in a hurry. The Pokémon Center wouldn’t open for another hour but I wanted to be early. And I discovered that I wasn’t the only one with that idea. There were people, mostly elders, asleep in the various lobbies around the mall. The lights were dimmed, which made it easy to take a quick nap myself. 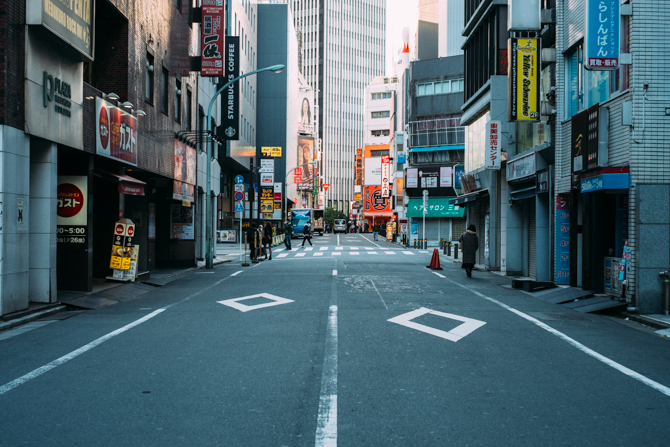 The Pokémon Center opened to a dense crowd. In ten minutes, parts of the store were nearly shoulder to shoulder. But the floor layout was open, which made it easy to browse the various shelves. Although it’d been eighteen years since I’d played Pokémon, it was great to see the mass amount of Pikachu merchandise. There were stuffed toys and Poké Balls but also Pikachu luggage covers. One item I came back to was a pair of chopsticks, which had Pikachu and Pichu printed on each stick.

After I made my purchase, I left Sunshine City. There were other stores throughout the mall but I wanted to spend as much time back in Akihabara as I could. As amongst the few wards I’d explored throughout Tokyo, Akihabara was by far my favorite ward. It has a rich and vibrate culture that suited me well. Plus, there were still an abundance of stores and shops to visit. I also was on the hunt for more Alien merchandise, particularly a small figurine to take home.

The train ride from Ikebukuro Station to Akihabara Station took around forty minutes, which allowed for me to arrive after noon. Since all stores were open by then, I didn’t have to wait to shop around. But I explored the various alleys for a bit to see the signage around the Electric Town portion of Akihabara. The advertisements and posters are bright, bold and colorful. Most signs are just text based, with colors that range from red, yellow, blue and green. 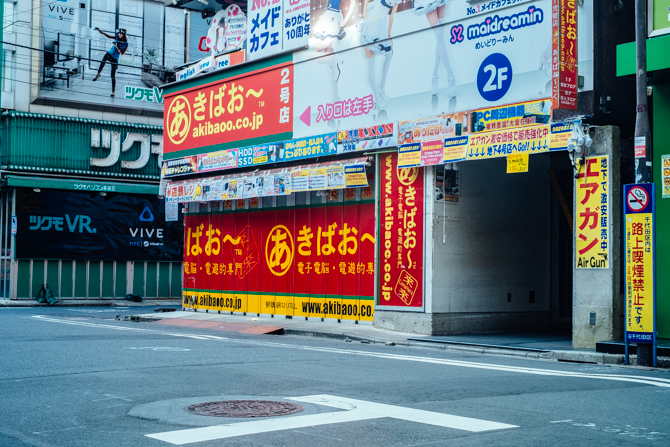 Around one, I started to wonder through various department stores near the exit of Akihabara Station. The first store I entered, which spanned an entire floor, had an immense amount of model kits. There were Gundams, Zoids and a good amount of military models. One of the completed models on display was a Grumman F-14 Tomcat, with an extreme amount of detail. It was fully painted and weathered, with skulls on the tail fins. It was truly impressive.

On another floor, I found a store that had a wide range of trading cards. From Pokémon to Magic: The Gathering, this store had it covered. Amongst their collection, there were a few notable items. The most expensive was an original Magic: The Gathering deck, still shrink-wrapped, for sale at ¥1,300,000. In USD, that converts to roughly $11,887. There were also a few Black Lotus cards with price tags that ranged from ¥580,000 to ¥600,000. 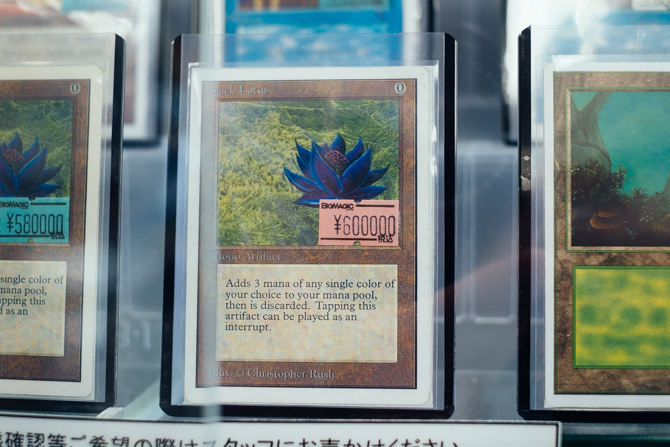 The strangest product I saw had to be a twelve-inch Donald Trump action figure with an interchangeable head, MAGA hat and podium. The podium had a sign that read, “Text TRUMP to 88022, Denver, Colorado,” in bold letters. It was on display with a few Hot Toy figures, such as Commando’s John Matrix, outside of another department store. It made my day to see a life-size facehugger from Alien underneath the figurine display with a Predator bust nearby.

As I exited the store, I was confronted by a tall white man with a Japanese camera crew. The man spoke English but with a slight accent. He asked if he could interview me on camera and ask me a few questions in regards to current events in the United States. I agreed and was mostly asked about Donald Trump and gun control, which I didn’t have much of an opinion on. Every time I answered a question, he would translate the response in Japanese and the crew would nod and smile.

It was truly an awkward experience for me but the man and camera crew seemed pleased. I just hoped I did not come off as an idiot. Who knows if and where that interview was aired. When we parted ways, I continued my search for an Alien figure. It took a few hours but I did locate an old wind-up Alien toy, which appeared to be quite old. It only cost five-hundred yen, which was less than five dollars. I wrapped it in a t-shirt and tucked it into the bottom of my backpack. 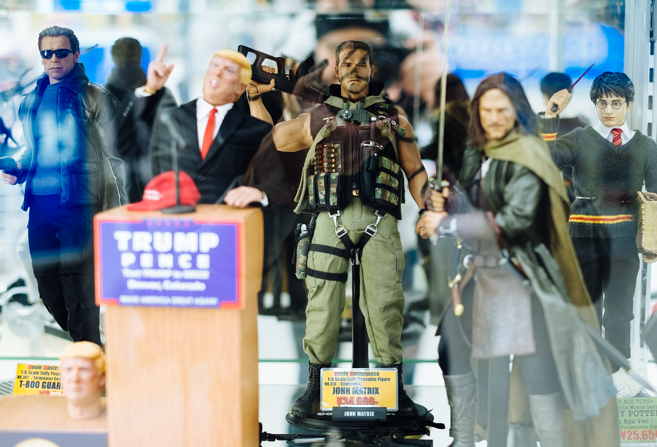 With my prize, I headed back to Shinjuku for dinner. On my way to Akihabara Station, I was taken back by all of the people in the middle of Chuo Dori, the main street that runs through Akihabara. There were no cars on the road and roadblocks had been put up. Most people took use of the closure to cross the street in peace. But I did see a few people just sit down and relax, right in the center. I took a few photographs and quickly crossed over to the station.

The ride back to Shinjuku was a sober one. It occurred to me that it’d be my last time in Akihabara and my last ride on the JR Line, at least for the foreseeable future. I cheered myself up with the thought of dinner at the Capcom Bar, a bar and grill that is themed around various Capcom video game titles. I had attempted to go a few other times throughout the week but it was either closed or I was too busy. But since it was my last day in Tokyo, I made it a priority. 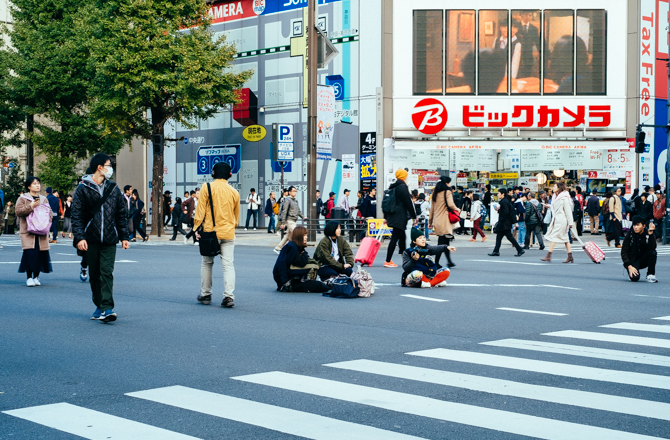 It was around dinner time when I arrived at the Capcom Bar. There were only a few other people inside, which included two staff members. I had a seat at the bar and was greeted with a menu and a glass of water. I ordered a drink called, Bio Organic Weapon, or B.O.W. for short. The drink, which was primarily vodka, was inspired by Resident Evil and came in a clear glass with an ice cube shaped like a brain. The bartender provided me with a syringe that contained some sort of blue liquid, which added flavor to the drink when mixed.

My meal was ordered somewhat blindly. Google Translate had a difficult time with the translation, so I’m not certain what it was labeled on the menu. It appeared to be steak and vegetables in a tortilla shell. All I know is that it was delicious. But not as tasty as the Brain Cake I had for desert. The dish came out on a small platter, in the shape of a brain, dressed in red sauce. One of the bartenders handed me a small blade and with a smile, gestured for me to slice the brain down the middle. I obliged him and took a bite, which was delightful. I finished the meal, paid the bill and headed back to the Hotel Gracery to drop off my backpack.

For the next two hours, I walked around Kabukichō. There were a decent amount of people around but not as much as Friday or Saturday night. Around ten, I returned to the hotel and packed my backpack, which didn’t take long. I Ranger Rolled my t-shirts and stacked them towards the bottom of the bag. Everything else piled on-top in an organized fashion. With that completed, I showered and read for a bit. I had to check out early in the morning, so it was time for bed.