Friday morning, I was out the door by seven. Breakfast was at Burger King, my new usual spot in Shinjuku. It was cheap, familiar and no one bothered me. I finished my food and walked over to Shinjuku Station, where I attempted to use one of the JR Line ticket booths. There was an English translation but I couldn’t figure out what ticket I needed. Thankfully, there was a service center. The staff all spoke English and helped me purchase a round-trip ticket for Akihabara. The ticket cost me less than one-thousand yen, which I paid with the coins I had.

The train ride to Akihabara was a peaceful half-hour. Most stations outside of Shinjuku were smaller, with less people. But the train car did fill up along the way. I followed the progress of the train via an electronic map along one of the walls. The JR Line did a big loop around Tokyo. Each time a station neared, the map updated the location and the intercom announced the station name.

Once off the train at Akihabara Station, I was able to immediately spot a sign for the Electric Town exit and rode an escalator to the bottom. I exited in front of SEGA Akihabara Four, one of the many SEGA arcades throughout this ward. Since it was still only around nine in the morning, all stores and arcades were closed. The streets were also deserted with little traffic. 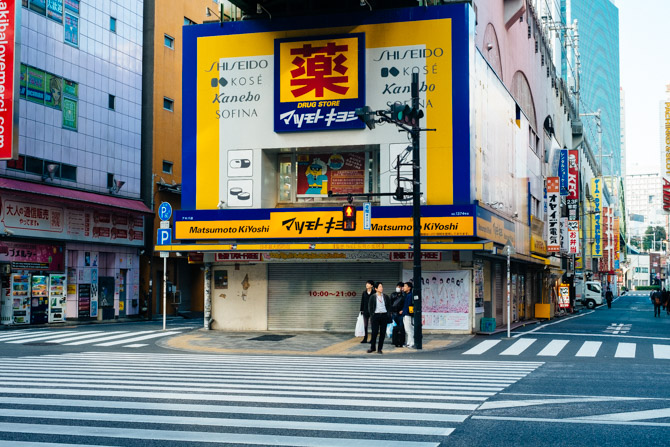 AKIBA Cultures Zone, a department store, was my first stop in Akihabara around noon. I headed up to Phantom, which is on the fourth floor. Although small in size, the store housed an impressive amount of military surplus goods. Brand name combat uniforms, plate carriers, boots and new Protec Alpha helmets. Phantom also had apparel and accessories based on Capcom’s Biohazard series. The prices weren’t bad but I convinced myself that I should save the yen I had.

Throughout some of the other stores in the Cultures Zone, I spotted Zoid models. I hadn’t seen these snap-kit toys since fourth grade. When Hasbro came out with their line-up in the United States, I had a vast collection. My parents even ordered high quality kits directly from Japan for me. There was a kit I favorited, Liger Zero Panzer. Nearly every store that sold toys had it used or new. I was tempted to purchase one of the kits but figured I’d have to ship it home anyway. 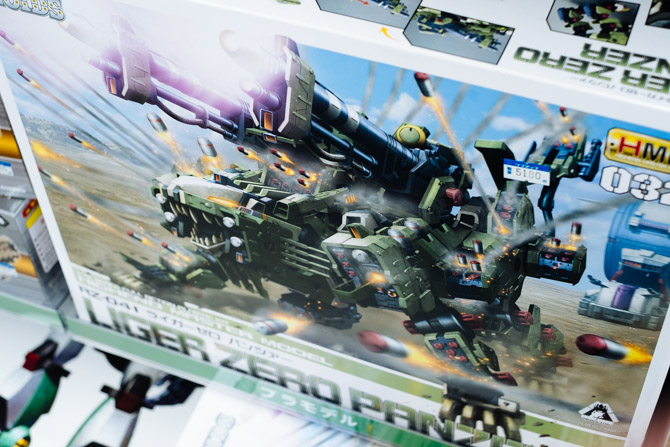 I went to the infamous Mandarake Complex next. Seven floors dedicated to anime, manga, video games and vintage toys. The first floor is dedicated to checkout counters and rarer, expensive toys in display cabinets. Floor two had cosplay goods, dolls and rare artwork. My one purchase, an Alien book that wasn’t released in the United States yet, was on the third floor.

The fourth and fifth floors are dedicated to Doujinshi, which is made up of self-published magazines, novels and manga. Floor six had an assortment of video games, consoles and DVDs. There were some figurines and vintage toys I found of interest on the seventh floor but the prices at Mandarake were high. Vintage toys were priced well above ten-thousand yen.

Down the street from Mandarake is Super Potato, a store that specializes in used games. This store had nearly every retro game and system I could think of. There were original handheld systems, Virtual Boys, Game Boys, Sega Genesis and Nintendo 64 consoles. I geeked out a bit when I spotted the GoldenEye Nintendo 64 cartridges, which were priced above five-thousand yen each. 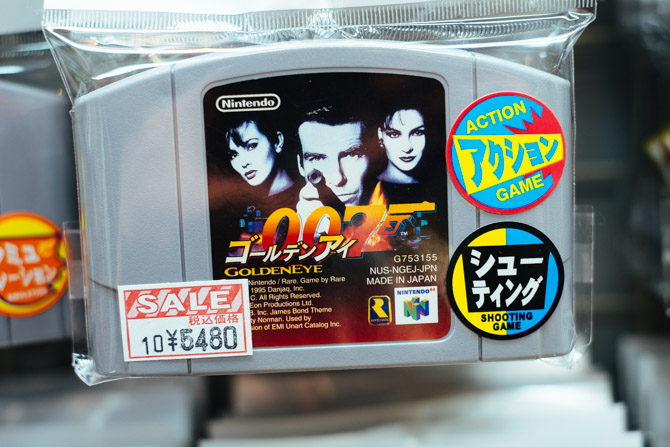 By this point in the afternoon, the maidens were in full force outside. Girls, dressed in a variety of maid and cosplay outfits lined the streets with coupons for cafés throughout Akihabara. In these cafés, the waitresses treat customers as masters. I looked into one café called Maidreamin but decided against it due to how densely packed the restaurant was. I purchased an egg sandwich from a street vendor instead for a few hundred yen.

After I finished my food, I entered a shop called Mulan Akiba. A densely packed mecca for gamers or otaku alike, the store sold games new and old, consoles, figurines, model kits and movies. And that’s just the first and second floor. The third floor contained hundreds, if not thousands, of pornographic computer games and movies. All categorized by content and type. The above floor had typical adult store content such as sex toys, dolls and health products. 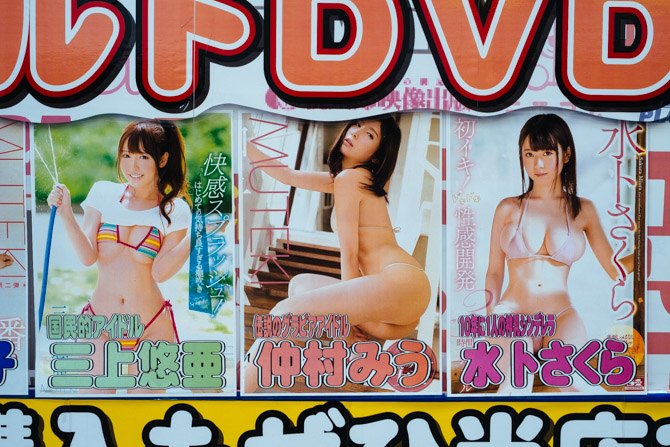 Nearby, I found similar items for sale at an adult store called Love Merci. The first and second floors contained lingeries, costumes and female sex toys. The upper floors had a variety of health products, sex dolls and toys targeted to men. Likely due to a mix of sexism and the types of products on these floors, these male oriented floors were marked off-limits for females. There were artificial sex toys based off of anime characters and boxes with illustrations of what appeared to be teenage girls with the word, “tight,” in bold letters.

And it is young girls that seem to be an obsession in Japan. Near Love Merci is a staircase that leads down to a basement gallery. Along the walls were gilded, framed artwork of young anime characters in nude, seductive poses. All of which were for sale. Near the doorway of this gallery was a small gachapon machine. In return for three-hundred yen, the machine would deposit a capsule with what appeared to be panties based upon a female anime character.

I explored a few more stores and arcades in the area and decided to return to Shinjuku. On my way to Akihabara Station, I could tell that it was busier than when I arrived. There was a constant stream of people exiting the station. The train car was even shoulder to shoulder. Shinjuku Station was far busier. There were hundreds of people in line when I exited the car. It must have been rush hour. 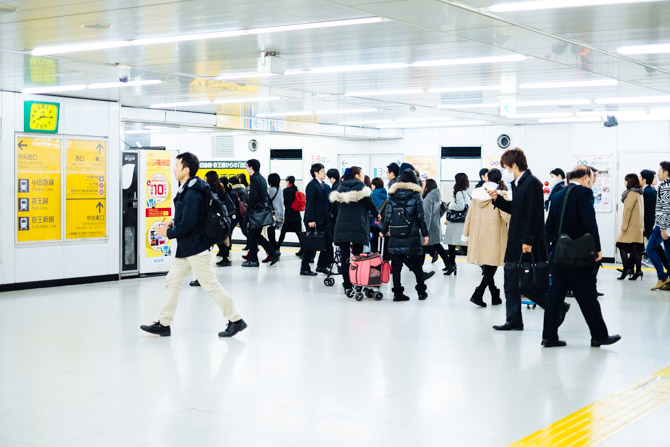 Back at the hotel, it felt great to take my shoes off, stretch out on the bed and fall asleep. My feet were sore but that’s one of my favorite parts of a trip. It lets me know that I had a successful day. Back home, I sit in an office for forty hours a week. Which means that for me, vacations are filled with activity instead of rest. I prefer to be constantly engaged and walk all day. That’s why I love big cities and one of the many reasons I chose to travel to Tokyo.