It was dark when the train pulled out of Narita. I did not expect this. In my mind, I had hopes to make it to Shinjuku and locate my hotel before nightfall. But it gets dark in Japan earlier than back home. It was six in the evening but it felt much later. I followed the progress of the train on my phone through Google Maps as the train snaked through small towns and past open fields. We pulled into Nippori Station roughly an hour later. This is where I had to make the switch from the Skyliner to the JR Line. The issue was that I had no idea how to get to the correct platform.

I exited the train and looked around. There was an escalator to my left that went upstairs and other platforms to my front. But there were no signs. I approached an older man and asked in Japanese if he spoke English. He shook his head and waved me on. I then walked up to a younger man behind him and pointed at my phone on which I had brought up a map of Shinjuku. He pointed up the escalator. I thanked him and bowed. He returned the bow and smiled.

Upstairs I spotted a security guard and showed him my ticket. He waved me through the ticket gate and guided me to an escalator that led down to another platform. I was tired, so I decided not to walk down the escalator. Instead, I stood to the left. I had heard that this was custom in Japan. It felt backwards but sure enough, a few people passed me on my right.

When I reached the ground level, I headed towards the nearby platform. The train that arrived had cars similar to what I was used to in New York City. The one real difference is heated seats, which weirded me out. I didn’t sit for too long though. More people got onto the train and I offered my seat to an older woman. When the train rolled out of the station, I braced myself while I held onto one of the plastic grips that hung down from the rails inside of the car. It was a jerky ride but that’s typical for any subway.

As we neared Shinjuku station, an announcement came over the intercom. First in Japanese, followed by an English translation, “The next stop is Shinjuku Station.” I tightened the straps of my bag and glanced around the car. Most of the young adults and teenagers aboard were focused on their cell-phones or game devices. One of them watched a Twitch streamer play Cuphead on his iPhone. But what amazed me was how quiet it was aboard. No one talked or even whispered. It was an odd but pleasant experience.

The train made it to Shinjuku station in roughly twenty-two minutes. I had read prior to my trip that Shinjuku was the busiest subway station in the world. It provided service to over three million people each day. And it was obvious how that number was reached. Outside the windows of my car, I could see people everywhere. As I exited the car, I located a sign for the East exit. The East exit, I learned from prior research, would lead me to Kabukicho where my hotel was located. I weaved in and out of crowds, making my way down a large set of stairs to the base floor of the station. The downstairs was filled with even more people. It was almost shoulder to shoulder. I truly had to watch where I walked to avoid running into anyone. While I watched my surroundings, I also looked for the yellow overhead signs. There were signs for other exits, such as North and South and other platforms. The sign for Kabukicho, which I found after a few minutes, pointed up a set of stairs that lead to an exit. 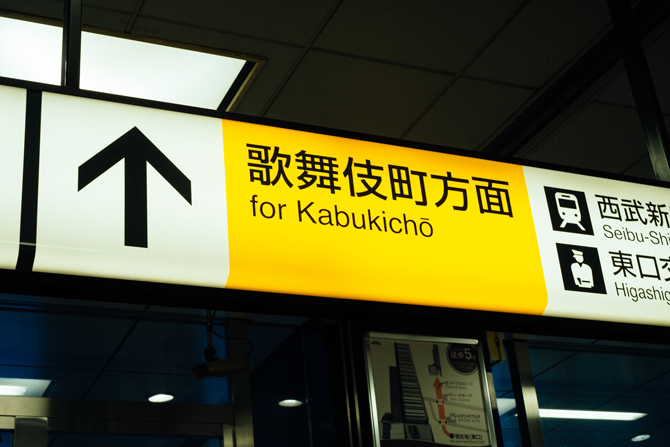 Outside, there were dozens of people gathered near the exit. Mostly young adults and teenagers. A lot of them sat or leaned on a guardrail that was positioned between the sidewalk and nearby street. I found an empty spot along the guardrail and brought up Google Maps on my phone. I typed in my hotel, the Hotel Gracery, to see which direction I had to head off to. Thankfully, it was a short walk North from the station. I crossed the street and headed down a side street into central Kabukicho.

To my left and right, neon signs advertised cafes and various hostess clubs. Some of the cafes so small that only a few people could fit inside. At the end of this street I passed a karaoke bar on the right corner called Karaoke Kan. As I rounded the karaokee bar, I caught my first glimpse of Hotel Gracery. The structure is massive. The ground floor houses restaurants and a Seven Eleven. Floors three to six are dedicated to Toho Cinemas, an incredible movie theatre. Above the movie theatre, Hotel Gracery rises up to thirteen floors with nine hundred and seventy guest rooms. The eighth floor, reception, is where the infamous Godzilla head is located.

The check-in process for Hotel Gracery was clear and simple. The receptionist, a young female, scanned my passport and put my credit card on file. She handed me two key cards and guided me to a bank of elevators. She explained that I needed to flash my card at a sensor otherwise the elevator would not work. I picked the nearest elevator and stepped inside. I flashed the card at the sensor, a small circle and the button for floor twelve highlighted. It’s a simple but thoughtful security precaution designed to keep non-guests out of the above hotel floors. The same system is also used throughout the hotel to gain access to individual hotel rooms.

I road the elevator alone. My hotel room was to the direct left of the elevator on floor twelve. I flashed my card at the sensor near the door handle and saw a green light light up. I twisted the handle and stepped inside the room. The room was pitch black. I felt along the wall and found a nearby switch. Yet even after I toggled the switch, no lights came on. I moved deeper into the room and felt along walls until I found another bank of switches near the bed. I pressed the first button I found and the interior light turned on within the bedroom portion of the room. I pushed the rest of the buttons and found various lights turn on around the bedroom. There was a small nightlight near the base of the bed, a reading light, desk and hallway light. 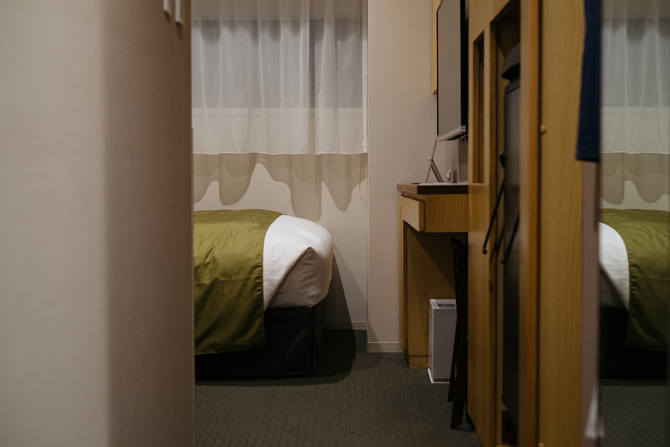 I went back to the switch in the walkway. I could see with the light on that I was required to insert my key into the light switch panel in order for the switch to work. I slid my card in and the lights and fan in the bathroom came on. My guess is that this sort of switch was designed to ensure lower amounts of power consumption. But to my surprise, there were two sections in the bathroom. The first section includes a sink and a fancier toilet. The toilet had a multitude of buttons and a bidet. The second room, behind a glass door, had a full-sized bathtub and shower head. There was enough room to the right of the tub to stand on the rubber floor and shower.

I spent the next few minutes unpacking. I had only brought clothes, a laptop and camera. So it didn’t take long. But I wanted to empty my backpack so that it would be ready for the next day. I then took my first shower in the room. I’ll admit that it took me a minute or two to figure out how to turn on the water for the shower and not the bathtub. As with the toilet, there were various buttons and nozzles. But towards the floor, under a counter, was a separate twist knob to turn on the water for the shower head. This was by far the most complex but interesting bathroom I’ve ever experienced.

My plan was to find breakfast for the morning after I showered. I could have easily went down to the Seven Eleven on the ground floor. But I made the mistake of lying down in bed. Shinjuku would have to wait until the next day. It was finally time to sleep.