Immigration is a strange place to be alone, especially if you don’t speak the native language. I remember walking into Narita’s immigration. There’s a large green sign above the entrance that reads, “Quarantine”. I’d never been through the immigration process before but I had an idea of what to expect. You fill out some paperwork, get your photo taken and your passport is reviewed. It’s simple. The strange part was that everyone around me spoke a foreign language. It was the first time in my life that I felt foreign.

While in-line, I started a conversation with an American I met on the flight over. He had the window seat in my row. I asked him about the immigration process and if this was all that I had to do. He said it would be fairly quick and he explained to me that this was the first step to getting into the country. The final step was customs, which was downstairs. We talked a bit more and he explained to me that his wife lived in Japan. He traveled often between the United States and Japan as a teacher. Soon after, as the line started to move, I lost track of him as I stepped aside at a side station to fill out some paperwork.

I found it a little odd that I had to fill out a form that was almost identical to the form I filled out on the plane. It asked the same questions and if I had certain items, such as commercial merchandise. But this form was for customs and the other for immigration. I filled out the form and tucked it into my passport. The line paused for me to get back in, thankfully.

The first real step in immigration is a mugshot. But unlike the DMV, no one is there to take your photo. A machine completes the process. You just have to stare into a small screen after your passport is scanned. Then you’re assigned a station for your passport to be reviewed. I was sent to station 5. A younger man took my paperwork and passport. He scanned my passport and looked over my paperwork briefly. He then placed a small stamp in my passport. The stamp gave me landing permission and I was cleared through immigration.

Once through the door, I spotted a sign that directed me to customs. The sign was translated into English and had an angled arrow pointing down. Customs, to me, looked fairly similar to a security checkpoint. There’s a small table for luggage to be reviewed and an agent to inspect. As I got into line, I watched how other people went through customs. For the most part, it was a quick process. You hand the agent your passport, with the booklet open, along with the customs form. The agent reviews the passport, asks you how long you’re staying in the country and why. That’s exactly how my experience went.

After I cleared customs, I entered the airport lobby. This was the moment where it truly hit me that I was in Japan. I was off my on own, free to go wherever. I had an initial emotion of mixed panic and confusion. But I told to myself to calm down and to just think about what I needed to do first, which was to locate the railway. I saw a sign with a bus symbol that pointed downward and found the nearest escalator. On this floor, I found a range of ticket booths and counters for various different railways. I chose the Skyliner. 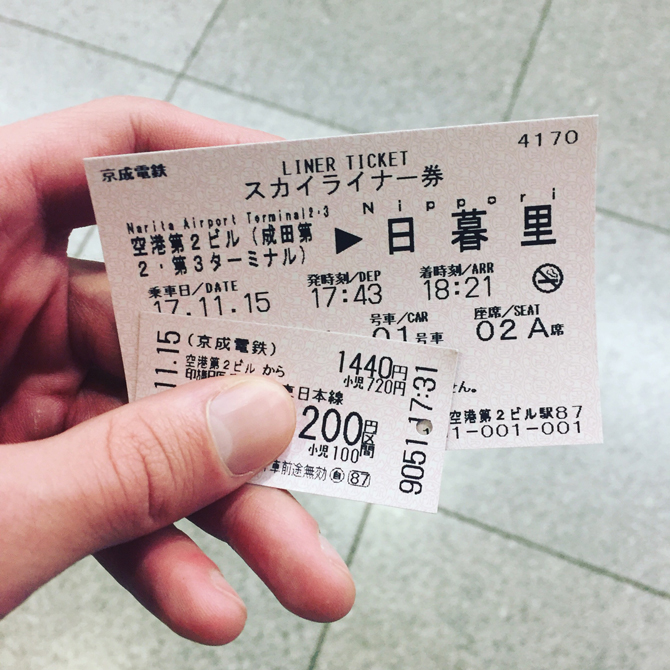 Purchasing my ticket presented me with the first opportunity to spend a bit of the Yen that I had on hand. The ticket cost me a little over 3,000 Yen, which is about twenty seven dollars in US currency. At first, I was concerned that all ticket prices for the subway were going to be this high. But the ticket agent explained that the normal subway tickets for the JR Line are only a couple hundred Yen. The ticket for the Skyline is pricier due to trip length, which was to be about an hour or so. The agent also explained to me that I needed to get off at a certain station and transfer to the JR line for Shinjuku.

As I exited the ticket center for the Skyliner, I was anxious again. I couldn’t tell exactly where I needed to go. There were a lot of signs around but I couldn’t seem to find one that said Skyliner. I approached a nearby security guard and in Japanese, I said, “Excuse me, Skyliner?” I also pointed at my ticket. He looked around briefly and pointed towards a set of stairs beyond a ticket gate. I said thank you in Japanese and walked up to the gate. I entered my ticket into one end and the machine spat it out at the other end. I walked through the gate and headed downstairs to the platform for the Skyliner.

My ticket had a specific car and seat listed. I tried to follow the signs to find the area for car one, my assigned car but the train arrived before I could find it. The good news was that each car was clearly labeled. So I just kept following it down to car one, which was at the tail-end. I got on board and found my seat. It was a relief to sit down. The doors closed a few moments later and the train pulled away from the terminal soon after. I was on my way to Shinjuku.