First and foremost, I should mention that I travel light. For the past year of travel, even to Japan, I’ve packed one pair of pants to cut down on space in my backpack. But Iceland taught me a valuable lesson about how denim does not survive in a wet environment. It started with a hike up to a waterfall called Glymur. Myles and I started the hike at ten in the morning. From the time of our arrival, the rain had been consistent for hours. Within a few minutes of the hike, my gloves and jeans were soaked through. Only my jacket was waterproof.

To make matters worse, there was a river crossing along the path to the waterfall. The rocks were small and far apart from one side to the other. The smart idea would have been to take my socks and boots off. I tried without doing so, which ended with my boots and socks soaked through and through. Thankfully, there was a cave to take refuge in half way to the waterfall. But although the cave offered protection from the wind and rain, it did nothing to stop the cold.

With the addition of light snow, the rain worsened. Myles and I eventually pushed on to the waterfall after twenty minutes in the cave. A few other tourists made the ascent with us, with appropriate gear for the weather. Glymur, which is the second-highest waterfall in Iceland, is absolutely beautiful. The total height is 650 feet, with fresh water served from the Botnsá river and Hvalvatn lake. We attempted to take photographs in the rain and then turned around for the descent.

From Glymur, Myles drove us to Krauma for lunch. The thermal spa is located an hour north of Glymur. Upon our arrival, my pants and boots were still wet. But we decided to go into the restaurant anyway, which made me uncomfortable. Mainly because the seats appeared to be some sort of suede. When I stood up to use the washroom, I could see a wet shape of my butt imprinted on the chair. It was not my proudest moment. Regrettably, we did not go into the thermal baths.

On the drive to Reykjavik, Myles and I drove through the Hvalfjörður Tunnel. The tunnel goes 541 feet below sea level and shortens the distance between the western and northern parts of Iceland. The majority of the afternoon was then spent back at the hotel in an attempt to dry off. I wrapped my jeans through the heated towel rack in desperation. Boots were placed underneath the heater near the bed. The soles dried in a few hours but the pants remained damp.

We left the hotel close to six in the evening for Hveragerði. The town is located forty minutes from Reykjavik. In the vicinity of Hveragerði is the Reykjadalur valley. The valley has a range of hot springs and even a heated river. We parked near the Dalakaffi restaurant to hike Reykjadalur. From the restaurant, the hike is over two miles uphill. The trail up to the top is steep and narrow. But the scenery is gorgeous with high banks of grass and rocky cliffs.

Even with the temperature in the fifties, there were dozens of people bathing in the river at the top. As the river is naturally heated, no one seemed to care. We even saw a few people run over to the river naked. Myles and I considered going in but the snow began to fall. Within minutes, the clouds opened up with a heavy rain. We immediately began our descent but were soaked for the second time that day. It was an absolute miserable hike down to the vehicle. 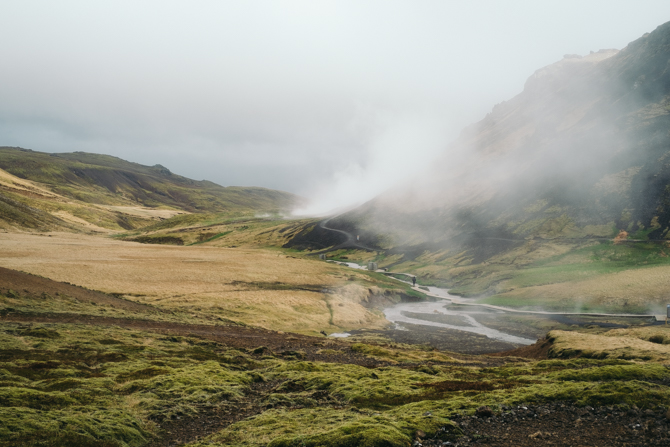 By that point, I was fed up with wet pants. I told Myles to drive me straight to Fjallakofinn, which is an outdoor store located in Reykjavik. From their sales rack, I found a pair of Marmot pants for over sixty percent off. Even though the pants still cost a little, the fit was perfect. It felt phenomenal to slip out of my soaked jeans into those new pants. I even asked if it was okay to wear the pants out of the store. The jeans went into a laundry bag for the rest of the trip.

We spent the remainder of the evening at Eldsmiðjan for a late dinner. Myles ended up with two pizzas, as the first pie was meant for a man who sat directly behind us. The waiter realized the mistake after Myles had already ate a slice. Myles devoured both pizzas with no complaints. Though I don’t believe the man cared for Myles too much. He stayed in the room next to us and had been woken up early in the morning by Myle’s alarm clock. Myles was in the shower and forgot to turn it off. But the pizza was delicious. A great way to end another day in Iceland.