The drive to Skaftafell, a wilderness area inside of Vatnajökull National Park, took over four hours. Myles and I got up early on Friday to make the day trip. After brunch at the hotel, we were on the road before seven. Past the main attractions in the south center of Iceland, it was a rare occasion to pass another vehicle on Route 1. Throughout the scenic two hundred mile drive, we had near constant views of distant mountains, waterfalls and cliffs.

We arrived at Skaftafell at eleven thirty in the morning. The service charge was 750 Icelandic Króna for parking, which is less than seven dollars. Payment was made inside of the visitor center, which came complete with a free park booklet. Myles and I also bought detailed maps of the area and decided that Svartifoss would be our first location. From the visitor center, the waterfall is a mile hike uphill.

In the ascent, snow mixed with rain pelted our bodies. It was an odd weather combination with various wind patterns. The higher Myles and I were, the more severe the wind was. Nonetheless, the route was clear and easy to walk on. The hike took us around forty-five minutes to reach Svartifoss. It was quite a sight to see the black basalt columns, which surround the waterfall, up close. The drop for the waterfall is eighty feet, with fresh water from the nearby Svinafellsjokull glacier.

Myles and I took a few photographs and proceed on a trail to higher elevation. We climbed up Sjónarsker and came across the view-dial, which shows the names of the surrounding mountains. The spot in which the dial is located provides phenomenal views of the surrounding area. I was able to take panoramic shots from the south east to west. It is an incredible view at that altitude. The trail was closed past that point due to poor conditions. 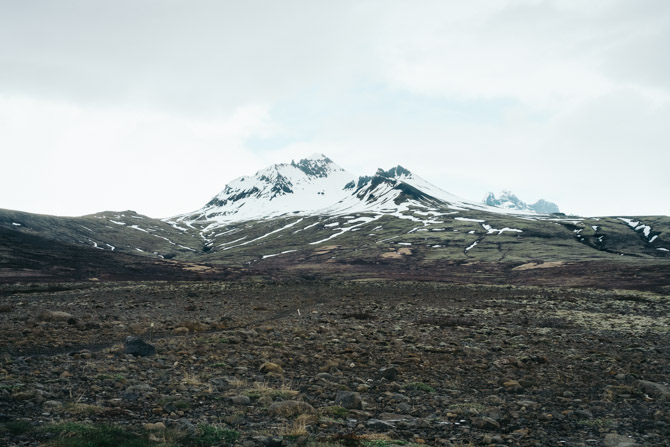 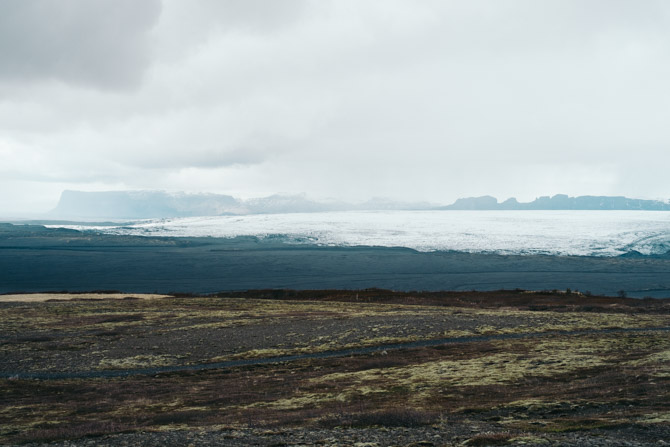 After Myles and I descended back to the visitor center, we bought lunch from a food cart called Glacier Goodies. There was a small selection of meals to choose from, which included lobster soup and baby back ribs. Although expected, the prices were high. I paid nearly three thousand Icelandic Króna for a Fanta and fish and chips. The meal was fine and delicious, especially after the morning hike. Though I wouldn’t say it was worth close to thirty dollars.

With lunch completed, Myles and I proceeded out to the Skaftafellsjökull glacier tongue. From the visitor center, the hike took around forty minutes. Oddly, we passed few people along the trail. The area seemed to be less popular, which I still don’t understand why. Near the glacier is a massive hill, which overlooks the field, lagoon and surrounding mountains. It truly is a fantastic view. Though it is hard to fathom the true size of the glacier from afar.

Without the appropriate gear or experience for glacier walks, Myles and I could only walk up to the edge of the glacier. The left side was the most approachable, which is butted up to a cliff. From up close, I could see that portions of the ice were melting. Large slabs of black mud covered a range of nearby ice caps. Even the ground was muddy, which sucked my boots in with each step. But there wasn’t any water runoff that we could see.

We explored the terrain to the east of the glacier for another hour, with an extended walk out towards the base of a nearby mountain. We were completely alone in this area, with no real sense of direction. There weren’t any designated paths either, which meant walking on top of boulders and baseball sized rocks. I had boots on but it was truly uncomfortable to walk on after awhile. I half expected to twist an ankle on one of the many rocky hills we climbed. 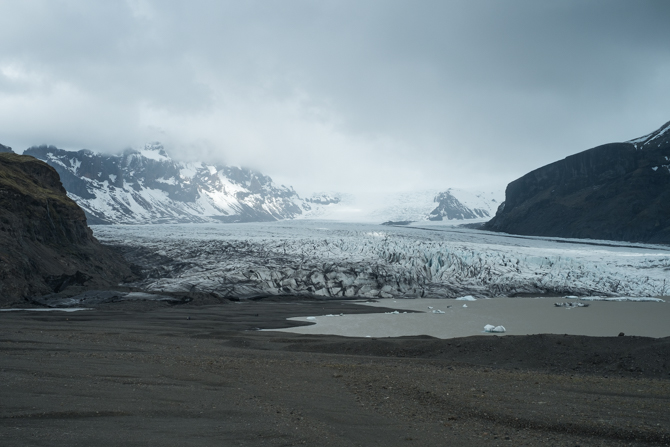 The hike back was long and tedious. Both Myles and I were worn out by the time we arrived back at the visitor center. My feet were sore and I was hungry. We hit the center’s cafeteria for lunch. I had a pizza panini with a slice of chocolate cake. Prices weren’t the best but beggars can’t be choosers this far out in Iceland. Though I was happy that the weather held out the entire afternoon. There wasn’t even a drop of rain and the temperature stayed in the fifties.

Along the drive back to Reykjavik, Myles and I stopped in the village of Vík í Mýrdal for gas. Though it began to rain, we walked along the beach afterwards. Towards the right side of the beach, we spotted hundreds of seagulls up in the cliffs. Most of the birds were nested under overhangs, with cover from the weather. Afterwards, we got back onto the road for the long drive back to the capital. We arrived a little after nine at night with enough time for more pizza at Eldsmiðjan.