There were still plenty of sites to see in Iceland, far too many. Thursday was dedicated to locations that Myles and I wanted to see towards the north east of Reykjavik. We got up around seven and were on the road again by eight. Though unlike Wednesday, we would not spend much time on Route 1 but a road called Road 36. The road is the main route from Reykjavik to a national park called Þingvellir, which was the first stop listed on our itinerary.

From the start of the day, Myles and I made a mistake. We forgot to get gas for the vehicle before leaving the capital. The SUV was around a quarter full. Once out of Reykjavik, onto Road 36 and beyond, gas stations are far in between. We only realized that once we were over half way to Þingvellir, which is about twenty-seven miles from the capital. A reasonable concern, I questioned whether we’d have enough gas to make it back to Reykjavik.

Once at Þingvellir, Myles and I paid to park. The fee was cheap, less than one thousand Icelandic Króna. Our first stop in the park was to the Öxarárfoss waterfall. Through signage, we learned that the water flows from the Öxará river and that the waterfall is slightly human-made. The nearby footpath trails through one of the many valleys in Þingvellir. Within well shaded areas, ice and snow were present. Though for the most part, it was all safe to walk on.

Myles and I ventured through Almannagja next. The fault line marks the eastern boundary of the North American plate and is over four miles long. With sizable cliffs bordering the left and right sides of the marked foot path, it’s the largest and most popular tectonic fissure in the park. Near the welcome center for Þingvellir are a few overlooks. From these wooden platforms, Myles and I could see the rift valley lake of Þingvallavatn to our right. 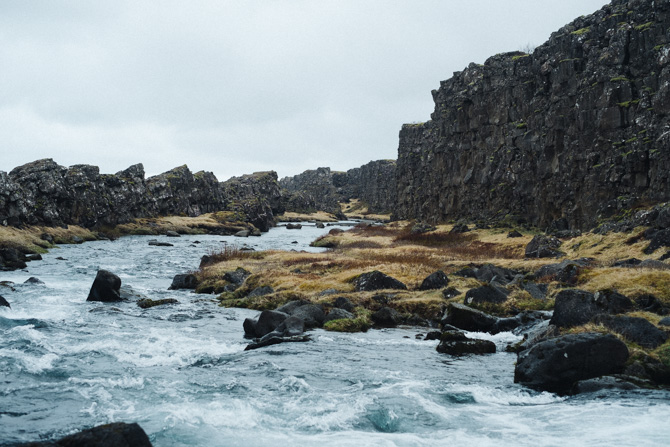 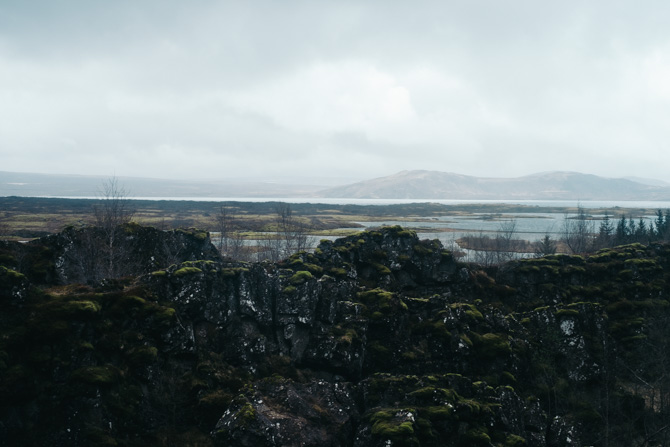 We left Þingvellir around ten in the morning and made the drive back to the outskirts of Reykjavik to get gas. Although necessary, the detour cost us a bit of time, around an hour total. On the way to Bláskógabyggð, Myles and I stopped for food at Restaurant Lindin in Laugarvatn. Down the road is the Laugarvatn Fontana, one of the thermal spas in Iceland with outdoor mineral pools. The restaurant is located between Þingvellir and Gullfoss, well within the Golden Circle. The staff were extremely friendly, spoke English and offered us seats immediately. For lunch, I ordered a cheeseburger with frites. Myles had the reindeer burger.

Bláskógabyggð is an eighteen minute drive from Laugarvatn, along Road 37. The parking lot was nearly full next to the gift shop and restaurant. There were tour buses and a wide range of SUVs and smaller cars. Myles found a spot towards the back of the lot. Thankfully, parking was free of cost. From the moment we opened the car doors, the pungent smell of eggs was apparent. This was due to the geothermal activity in the area. Across the street from the parking lot are the geysers Geysir and Strokkur.

Strokkur erupts every eight minutes, an impressive sight. The spout can shoot up to over one hundred feet. Myles and I watched a few people get drenched as they stood too close to the hole. Nearby Strokkur and Geysir are a range of hot springs, which generate large puffs of steam. The steam clouds parts of the area, which creates an interesting atmosphere. Along the paths were average temperature markers, which warned tourists not to get too close or touch. 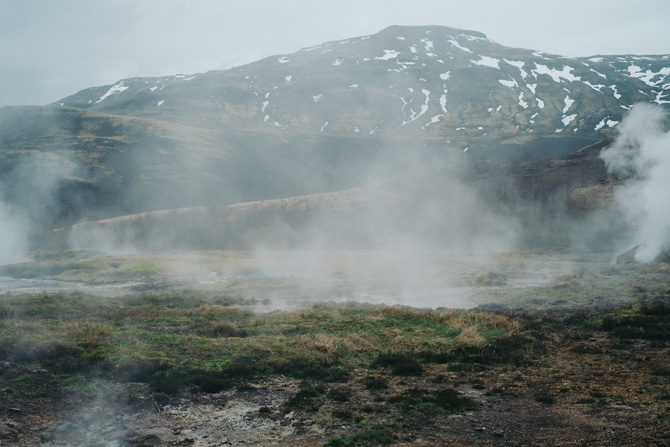 After Myles and I did a loop around the park, we moved onto Gullfoss. The waterfall is an eighteen minute drive from Bláskógabyggð via Road 35. Similar to Bláskógabyggð, there were a range of tour buses and other vehicles in the parking lot. We saw a few unique vehicles, such as a smaller tour bus with monster truck tires. These were the type of vehicles that could pass through F-roads, roads that required a 4x4 vehicle, with no issue.

Parking was free but the washrooms were not. The entry fee for the washroom was two hundred Icelandic Króna per person. There were card machines between the metal barrier gates, similar to a subway system. My guess is that the generated revenue from the bathrooms goes towards maintaining the area, as it’s completely free to view the waterfall. Near the washrooms is a metal staircase that leads down towards the dirt path that trails out to Gullfoss.

Unlike waterfalls such as Seljalandsfoss, there’s an overlook for Gullfoss. The overlook provides an impressive view of the waterfall. At a height of over one hundred feet, Gullfoss has two drops with the longest being sixty eight feet. Although not visible from above, the water falls into a deep crevice below. From a distance, the mist from the waterfall coated Myles and I from head to toe. We spent ten minutes out at the overlook and then trekked back up to the vehicle. 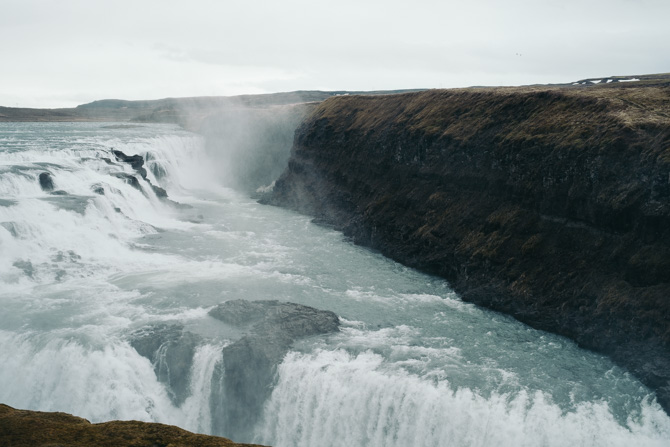 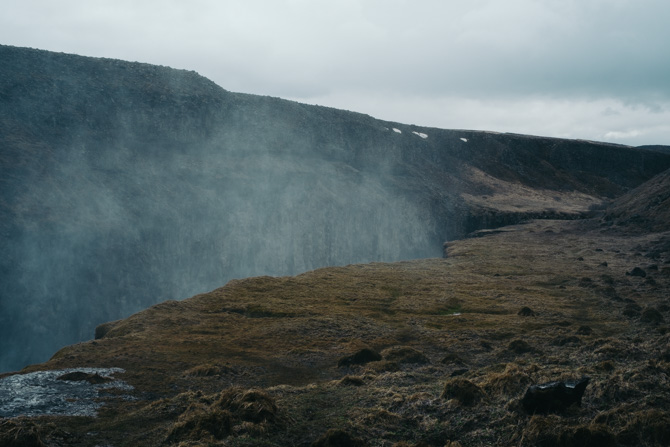 Initially, Myles and I were set on driving to a volcanic crater called Kerið. But along the drive back through Bláskógabyggð, we spotted a trail up in the hills above the Geysir and Strokkur area. The foot path is accessible down the road from the lot we had parked in earlier. The highest point above offers a panoramic view, which is unobstructed for many miles to the north and north east. We only encountered two other people up top, which made the ascent and descent quick and personal.

The drive from Bláskógabyggð to Kerið took around a half hour. The weather worsened on our arrival, with light rain and high wind. Parking was free but entry to the crater cost four hundred Icelandic Króna. Myles and I paid and made the walk down the wooden steps towards the bottom of the crater, which is nearly two hundred feet deep. At almost nine hundred feet across, the crater has it’s own shallow lake. We walked around the bottom for a short time and returned to the vehicle. The rain and wind made it hard to enjoy the experience.

But with Kerið crossed off the list, the itinerary was complete for the day. Myles and I started to make the drive back to Reykjavik. Though we didn’t make it far along Route 1. A cop car was parked horizontally across the road not too far from the turn off from Road 35. For reasons unknown, the road was closed and we were pointed down a long gravel path. The detour made the drive back to Reykjavik a lot longer than the calculated fifty minutes from Kerið.

Once back at the hotel, Myles and I decided to have dinner at Eldsmiðjan, a stone oven pizzeria attached to the hotel. I ordered a small pepperoni pizza with pineapples on top and Myles ordered a similar mixed blend pizza. I also ordered a fountain drink, with the idea that I’d just use the cup for water. But the fountain machine did not serve water, which caused to end my long streak of no soda. Fanta, which is wildly popular in Iceland, tasted tangy and sweet.