Wednesday was the most well-thought out and detailed day of the trip. It started with breakfast at the hotel at around seven thirty, with the goal to leave the hotel by eight. For the half-hour breakfast, I enjoyed three waffles, sausages and baked beans. The coffee was great with no sugar and the orange juice just sweet enough. There also was a wide range of pastry offered, including croissants. But I refrained from overeating, as Myles and I had a lot of ground to cover that day.

As planned, we left the hotel by eight. Our first stop for the day was Seljalandsfoss, a waterfall located in the southern region of Iceland. From Reykjavik, the drive to Seljalandsfoss took roughly an hour and a half along Route 1. The weather, as typical in Iceland, was unpredictable. Sometimes it rained, sometimes the rain stopped for a half hour. As Myles pulled into the parking lot for Seljalandsfoss, it began to rain with a slight wind.

Near the middle of the lot is an automated payment booth for parking. There didn’t seem to be any apparent enforcement for paying. But Myles made a payment and received a paper ticket. From there, we went on foot towards the base of the waterfall. Once close, the mist along with the rain coated my belongings, along with my camera bag. So it was a mad dash to get underneath the waterfall. The entire time I felt I was on the verge of slipping on a rock.

Myles and I spent about a half hour at Seljalandsfoss before we moved onto the next location. Hot chocolate and coffee was considered but I didn’t want to spend króna until lunch time. Though I was tempted, as the wind and rain chilled me to the bone. The mistake I made was to not wear my Under Armour thermals. We got back into the car to warm up and drove along Route 1 towards Skógafoss, another waterfall. The drive was only twenty-six minutes to the east. 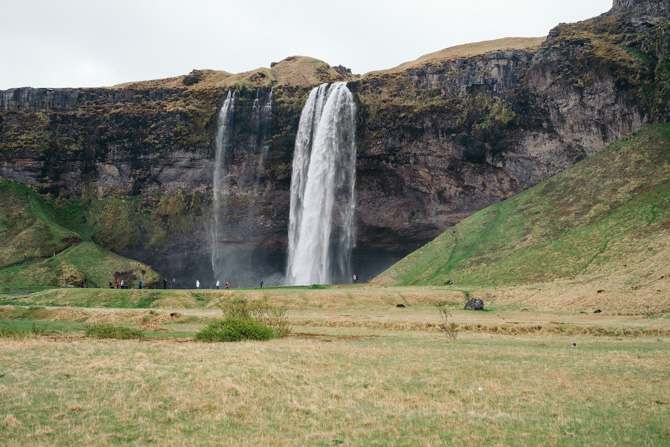 Skógafoss had more foot traffic. There were large tour buses and a vast number of rental cars. Most people gathered at the base of the waterfall. Myles and I took the steps to the top of Skógafoss first, which is to the right of the parking lot. In total, we climbed over five hundred steps to reach the overlook platform above. Once at the top, we had a grand view of the waterfall and the dozens, if not hundreds, of seagulls that nested on nearby ridges.

With an almost two hundred foot drop from the top, the base of Skógafoss is an impressive sight as well. From a short distance, the spray coated Myles and I’s clothes and gear. We took in the sight, snapped a few photographs and walked back to the vehicle. It was early still but we decided to see if any food was available in the nearby village of Skógar. Luckily, a restaurant called Fossbúð was open. Myles and I both had burgers with complimentary water. 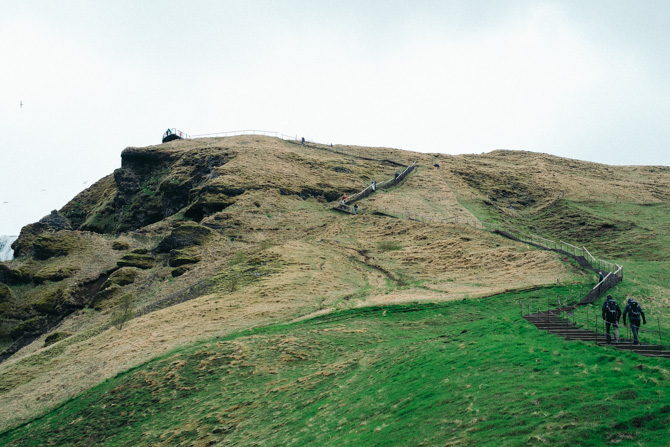 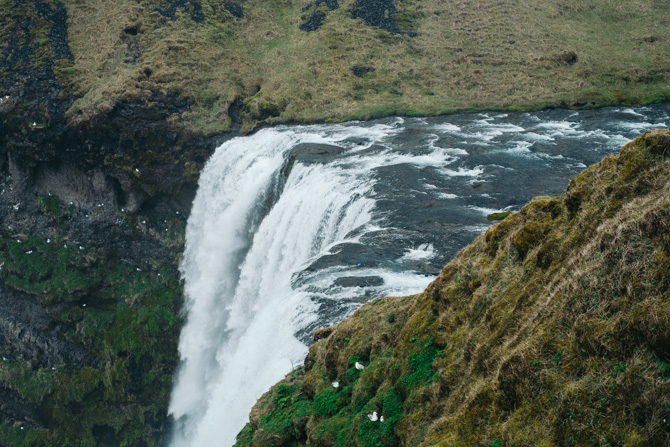 The Sólheimasandur plane wreck was next on the list. Similar to the drive from Seljalandsfoss to Skógafoss, Sólheimasandur took Myles and I twenty minutes further along Route 1 to the east. From the parking lot, the beach is visible in the far distance. But it is deceiving, as it took Myles and I roughly fifty minutes on foot to reach the wreck sight. As the landscape is barren, the crosswinds mixed with light rain made the walk seem endless. The plane was a welcome sight.

Myles and I both raced down to the plane, as at that point and time, we were the only two people in the area. In the distance, we could see a group of people headed towards the crash. So we hurried to take pictures and explore the plane inside and out. The hull of the plane was battered from the years of abuse from the environment, mixed with graffiti. There wasn’t much to look at inside. All of the seats and parts appeared to be gutted many years ago. 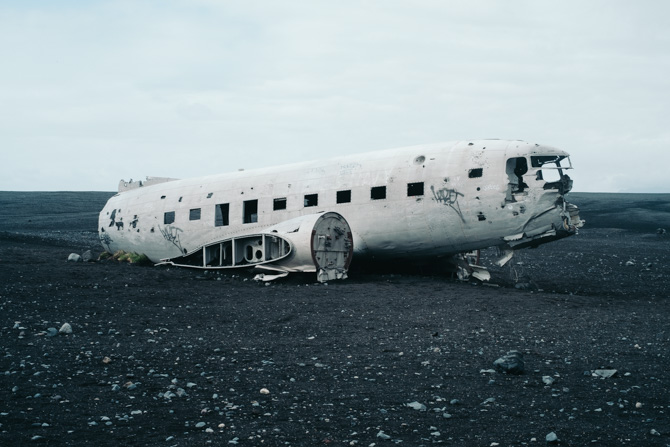 The walk back was cold and uneventful. Once at the vehicle, Myles and I pushed on towards Dyrhólaey. The peninsula is located nearby, another twenty minutes to the east along Route 1. The first turn off is road 218, which snakes down towards the southern point of Iceland. The path for Dyrhólaey is located towards the end and is unpaved, marked as a 4x4 only path. We drove in the direction of the lighthouse, which is situated on-top of a large cliff.

To get up to the lighthouse, Myles had to slowly drive up the winding path that leads to the parking lot. The path is narrow and difficult to fit two vehicles side by side. Each corner was a concern but traffic was light. Once at the top, Myles and I could feel the gale-force winds against the vehicle. I made the mistake of leaving a few pages of the itinerary on the dashboard, which immediately got sucked out when I opened the door and blown around the parking lot.

We walked towards the cliff edge near the right side of the lighthouse, which provides a wide view of the ocean and a beach of black sand. The winds were strong and turbulent, which made it difficult to steady my camera. But there was no rain, so the weather was bearable. Myles and I walked in a loop around the lighthouse and then took a questionable dirt path down towards another cliff far to the left of the parking left. The rocks along the path were damp, which made it difficult to move quickly with the wind on our backs. 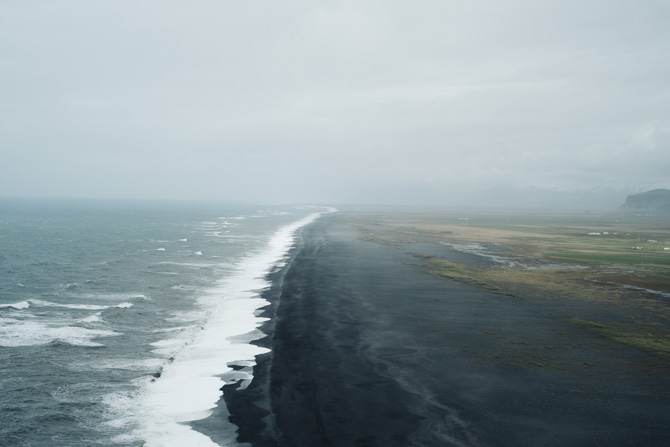 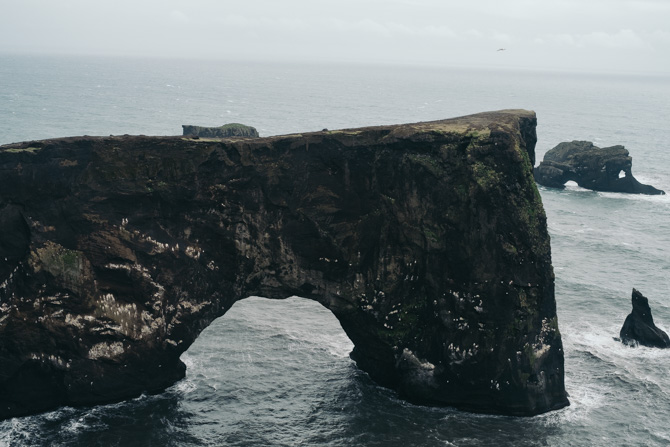 Myles and I returned to the vehicle not long after and made the slow drive down from the cliff. We wanted to move onward to Reynisfjara to see the black beach up close. But along the way, near Dyrhólaey, we spotted a cave. There is a turn off and an apparent parking spot, though no other vehicles or people were around. We got out of the vehicle and trekked up to the mouth of the cave. But there wasn’t much to explore from within. As we were about to walk down back to the vehicle, I spotted footprints that snaked around the cave and up a ridgeline to the right.

The worn path was stable and easy to traverse. Though as we got higher, the wind picked up and became a concern. When I crossed the highest ridge, I stuck close to the ground and crawled forward. I felt too exposed and unstable on the rocks. But I made it to a flat surface and had a decent view of the surrounding area. Myles and I took a few photographs and decided it was best to return to the vehicle. It was time to go to our last location for the day. 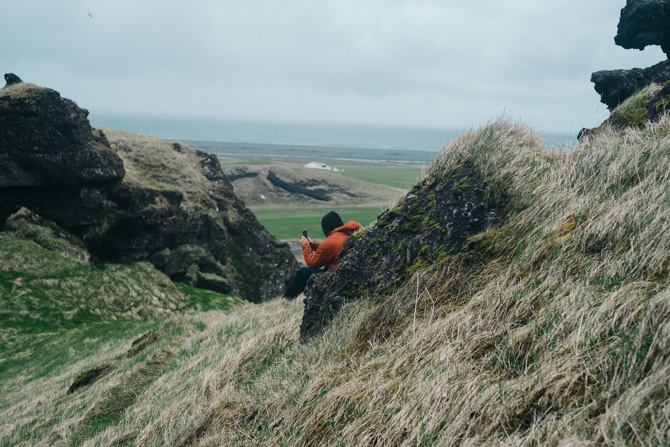 Reynisfjara, as with every other location that day, was twenty minutes further to the east along Route 1. The parking lot for the Black Beach Restaurant and the beach was nearly full. There were tour buses, w manSUVs and smaller cars. Myles parked us near the entrance and we walked out towards the left side of the beach along a small foot path. Along the way, Myles spotted a few goats high up along a cliff to our left. The highest goat called out to the others as they climbed upward.

Out along the beach, the waves crashed along the shoreline as a light rain fell. The wind wasn’t as extreme as it had been at Dyrhólaey, though it was colder this close to the ocean. Myles and I walked along the beach for twenty minutes, from left to right. We were mindful of the tide, as the water began to come more inward with the force of the waves. Once we were cold enough, we decided to call the day and have dinner at the nearby restaurant. I ordered pasta with a large slice of cake. By paying for our food, we were able to use the washroom without additional payment.

Myles and I finished dinner and returned to Reykjavik. We arrived back at the hotel around six in the evening. It had been a long day, with lots of walking but we had went to every planned location in the south center of Iceland. Though early, I took a long shower and stretched my legs. The heated towel rack was a real treat. Afterwards, I listed to music and an audio book for about an hour before I fell asleep. In the morning, we’d hit Þingvellir.