The Boeing 757 touched down in Iceland around six thirty in the morning on Tuesday, May 15th. Off the plane, I was corralled towards the main terminal with the rest of the passengers. But unlike in Tokyo, Japan, I didn’t have to immediately go through customs. I was able to link-up with Myles, my travel partner for the trip, near a small cafe in the airport. We attempted to get some coffee but all of the stores past security required an outgoing boarding pass.

With our quest for coffee postponed, we walked over to customs. Since the airport in Keflavik is so small, the few lines to go through customs were small. It took roughly five minutes in total. I wasn’t even asked any questions about why I was in the country. I just smiled, greeted the worker and my passport was stamped for entry into Iceland. Myles, however, was asked how long he would be in the country. Maybe it does help to put on a little charm.

Once out of customs, Myles and I made our way down towards the exit of the airport on the ground floor. Along the way, we were forced to walk through a duty free shop. The store primarily sold a wide range of liquor, snacks and electronic goods. But no coffee. Then we spotted a Dunkin' Donuts in one of the corners, only to find out that they didn’t serve coffee. The worker pointed at a coffee pot in the back and said, “Coffee machine.” I was confused and disappointed.

Afterwards, it was time to checkout the rental vehicle. Expedia set us up with an automatic SUV through Europcar, a French car rental company. All that was needed was a valid drivers license and a few signatures at the counter. Once cleared, Myles and I were assigned a Toyota RAV4. The vehicle had plenty of space, four-wheel drive and appeared somewhat new. The only downside was that our model did not have on-board GPS. Thankfully, I had full cell coverage and Google Maps.

I was up first for driving, which I admit I was somewhat skeptical about. More so because I’ve barely driven anywhere outside of Gwinn or Marquette. But for the most part, the laws of the road in Iceland are similar to back home. The one major difference is that speed is determined in kilometers instead of miles per hour. The most common speed on paved roads is ninety kilometers, which is nearly fifty-six miles per hour. On long stretches of road, it felt super slow.

Our first stop was the Blue Lagoon. We originally considered going into the geothermal spa but the price was nine-thousand Icelandic króna or eighty-five dollars. Instead, Myles and I had some coffee at the cafe, used the washroom and continued on towards the coast. Near the Blue Lagoon, we caught sight of Grindavík, which is a fishing town on the Southern Peninsula of Iceland. We pulled off the road near the top of a hill and had a panoramic view of the town. 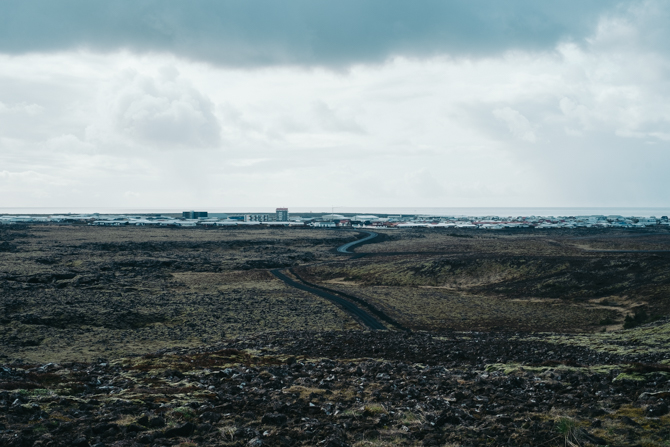 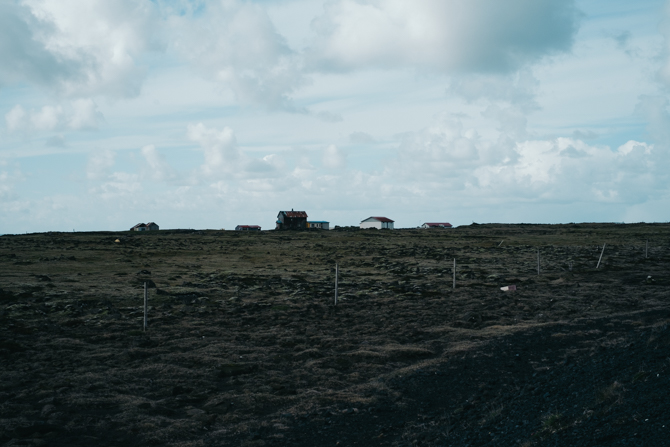 Near Grindavík, along Route 43, Myles spotted a dirt road that was in the direction of the ocean. We turned onto the path, with no real idea of the road conditions. The landscape was odd with black sand, moss and large chunks of rocks spread out for miles. There actually was somewhat of a parking lot about a mile or so down the road. It seemed more of a turnaround spot than anything. But Myles’s and I exited the vehicle and walked down to the surf.

Spread between the rocks and dirt were pieces of trash, kelp and driftwood. There wasn’t much of a direct path to the water, so we just weaved through and stepped on an endless amount of rocks. As some parts of the beach were wet, the bottoms and toes of my boots turned black with the sand. I started taking pictures while Myles ventured closer to the surf. I’d read plenty of stories of people being swept out to sea in Iceland, so I kept a distance. 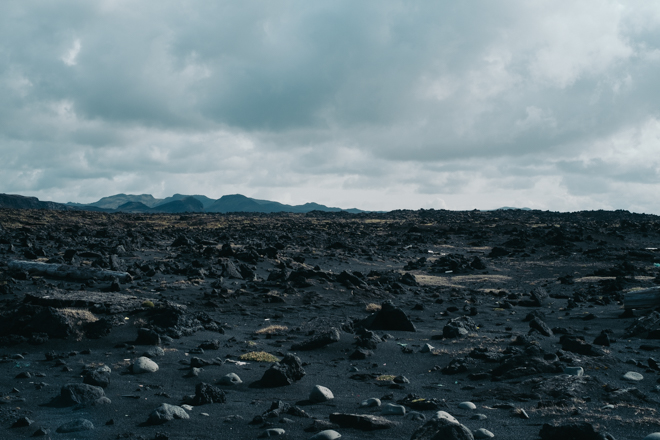 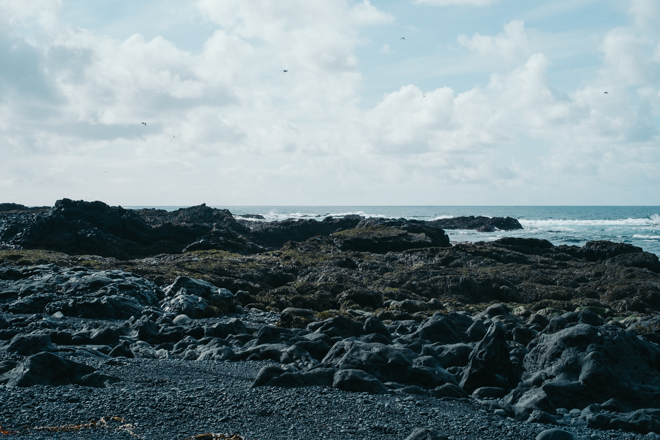 After about thirty minutes on the beach, Myles and I got back onto the road. We took Route 427 towards Þorlákshöfn, which provides an almost endless view of the ocean and plenty of farm land. Throughout the drive, the radio station we selected had some of the most random music. Shaggy to Metallica or Kanye West to Icelandic Country. We also heard what appeared to be Icelandic Reggae. All stations in Iceland also appeared to be uncensored, which was strange.

Past Þorlákshöfn, Myles and I took Route 39 for a few miles. The road eventually connected with Route 1, which is the main road that runs around Iceland. Near the capital, Route 1 took us through a mountain pass. The weather conditions changed drastically once we were at a higher altitude. It was a whiteout blizzard until we descended. But below the pass, the skies were overcast and there was no snow on the ground. And from below, we could see Reykjavik in the distance.

It was a stark contrast in traffic once we reached Reykjavik. There was a rush of traffic with plenty of two-lane roundabouts. But it didn’t take long to locate Reykjavik Lights, our hotel for the trip. The hotel is located in the eastern part of Reykjavik, along a street called Suðurlandsbraut. It was only noon when Myles and I pulled into the parking lot. The hotel staff were nice enough to let us check in two hours early. Our rooms were side by side on the fifth floor with views of a large mountain.

Part of me wanted to sleep. I’d been up for over 24 hours. But it was still afternoon in Iceland, so I didn’t want to waste the day. I also didn’t want to mess up my sleep schedule. So Myles and I freshened up and went out in search of dinner. We settled on an oriental restaurant and had mass portions of chicken and rice. Then we took a walk around Reykjavik. Within the city, Iceland didn’t feel so different. There are plenty of hotels, residential buildings, highways, crosswalks and shops.

While still near the hotel, Myles and I searched for affordable power adaptors. Nearly every shop had the adaptors priced well above six-thousand Icelandic króna. It also was difficult to find an adaptor for a two-pronged plug. Most of the adaptors we found were for other countries or USB only. Through some online research, I learned that an electrical supply store called ELKO was the place to go. They sold me an unpackaged adaptor for about 1,270 Icelandic króna.

For the remainder of the afternoon, Myles and I walked down to Skarfabakki Harbor. From the hotel, it was a forty minute walk. There weren’t many ships within the harbor but we did see a big Icelandic Coast Guard vessel. Once back at the hotel, I unpacked my backpack, put away my clothes and stretched out on the bed. With the curtains open, I donned a sleep mask to block out the light and put on audio book. I was out before the end of the first chapter.